Cue this one up for today’s soundtrack: https://www.youtube.com/watch?v=tSk5U4oHhu0

Today I learned the statistical acronym SAIDI: System Average Interruption Duration Index. It’s the internationally recognized formula for calculating the average outage duration for each customer served by a utility, and it’s calculated by the expression:

For those of you still PTSD’d from high school algebra and things containing letters from the Greek alphabet, in other words, it’s the sum of all the customer interruption durations divided by the total number of customers.

Why should anyone care, do you ask?

Following up on our recent examination of supply chain risk under-mitigation, have you or anyone else in your company investigated the impact to your business if, suddenly, employees’ mobile phones stopped working for any extended length of time? Well, a Reuters exclusive from late last month reported that Europe is likely headed toward power disruptions that will take down mobile phone service on the regular this winter. Buried in their forest of compelling data points is the observation that most (which is to say not nearly anywhere near all) telecom towers in Europe are fitted with backup batteries capable to last around 30 minutes in order to run the mobile antennas that enable cell phones to work. This brings us back to SAIDI. Let’s eliminate the United States from the table, because our SAIDI of 4 hours and 40 minutes is otherwise off the Western European chart: 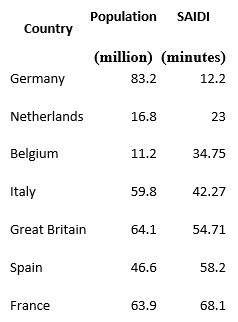 Ex-Eastern Bloc countries like Poland are even worse than the US, so we’ll conveniently ignore them too. What you and I can infer from these (admittedly outdated—I couldn’t find 2022 numbers) figures is that the usual less-than-30-minute power disruption in Germany and the Netherlands would possibly be NBD (i.e., no big deal). Battery backups would easily carry your complete conversation with your spouse about who’s responsible for the dinner ingredients tonight, and you’d have trouble selling the ruse that the reason you didn’t bring home groceries was that, before it was agreed who was going to do so, you lost service. However, if your employees or mobile point-of-sale (POS) purchase authorization system were to be, say, anywhere else in Europe, there might be the need for a risk assessment and contingency plan—lest the company find itself going proverbially hungry that night.

What leaves me most concerned about all this is how companies’ risk assessment and mitigation strategies always tend to swerve toward easiest-to-measure things—like interest and currency rate swings for which standard math and financial derivative products exist to well understand and hedge. As we’ve noted with supply chain metrics and coincident compensation bonus schemes, there’s a serious temptation to manage toward measurements rather than embrace the terror of what my college curriculum noted as “Downside Risk.”

If you Google Downside Risk, the first links will be about numerically measurable things like stock prices, which are, by their definition, not the kind of math I’m talking about. Even the top entry about Downside Risk in Healthcare talks about occasions when the total cost of care becomes greater than projected budgeted costs. What I’m talking about is Downside Risk of the sort of not getting up off the operating table as opposed to who might settle your bill. Mobile phones blinking off en masse are hard to quantify, but are, as the Spaniards at 16 minutes beyond expected cell tower battery life might say, “no bueno”.

A friend bullish on the promise of artificial intelligence recently observed that AI analysis of English currency stability and energy price risks would have months ago pointed out the probability of today’s instabilities related to the Russian invasion of Ukraine. Perhaps someone might also write an algorithm that will help CEOs anticipate other major challenges, like the absence of European mobile phone service, that will bedevil them in the very near future.

Good news for those of us of a certain age—we already know what to do with our old soup cans and spare balls of string.