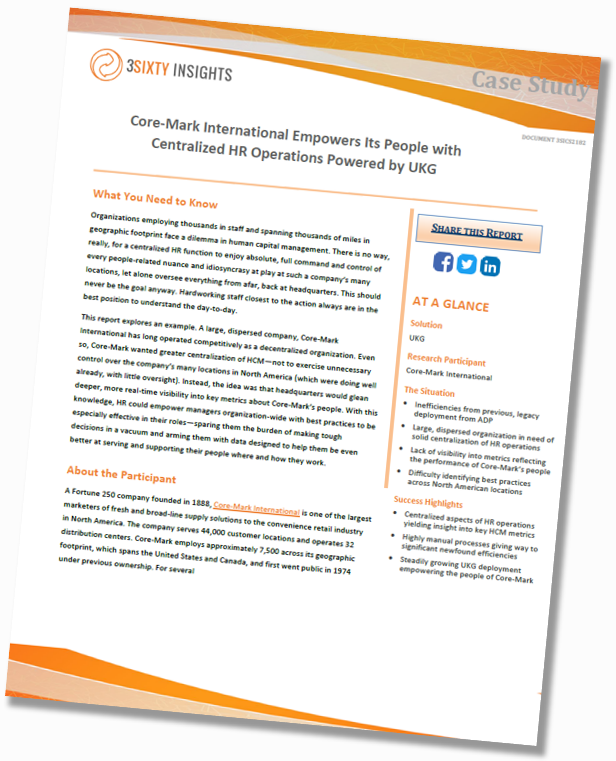 Organizations employing thousands in staff and spanning thousands of miles in geographic footprint face a dilemma in human capital management. There is no way, really, for a centralized HR function to enjoy absolute, full command and control of every people-related nuance and idiosyncrasy at play at such a company’s many locations, let alone oversee everything from afar, back at headquarters. This should never be the goal anyway. Hardworking staff closest to the action always are in the best position to understand the day-to-day.

This report explores an example. A large, dispersed company, Core-Mark International has long operated competitively as a decentralized organization. Even so, Core-Mark wanted greater centralization of HCM—not to exercise unnecessary control over the company’s many locations in North America (which were doing well already, with little oversight). Instead, the idea was that headquarters would glean deeper, more real-time visibility into key metrics about Core-Mark’s people. With this knowledge, HR could empower managers organization-wide with best practices to be especially effective in their roles—sparing them the burden of making tough decisions in a vacuum and arming them with data designed to help them be even better at serving and supporting their people where and how they work.

A Fortune 250 company founded in 1888, Core-Mark International is one of the largest marketers of fresh and broad-line supply solutions to the convenience retail industry in North America. The company serves 44,000 customer locations and operates 32 distribution centers. Core-Mark employs approximately 7,500 across its geographic footprint, which spans the United States and Canada, and first went public in 1974 under previous ownership. For several

intervening years afterward, Core-Mark returned to private ownership. Since 2005, the company has publicly traded on the NASDAQ.

To gain an understanding of the company’s deployment of UKG (Ultimate Kronos Group), 3Sixty Insights spoke with Ahmad Noordin, who joined Core-Mark in December 2020 as senior director of human resources. Responsible specifically for systems, payroll and people analytics at Core-Mark, Noordin has previously worked at comparable levels in HR at several large companies, where he gained experience working in several of the longest-running, most well-known platforms for HCM, including PeopleSoft, Workday, and SAP SuccessFactors.

Complete the form below to access the full 3Sixty Insights Case Study: